Reading on The Prehispanic Filipino

Recently, I got a book called Looking for the Prehispanic Filipino by William Henry Scott. Scott is an American historian and anthropologist who specialized in the Philippines and his book details the bulk of his work in looking for an accurate picture of Philippine society before the coming of colonial powers. 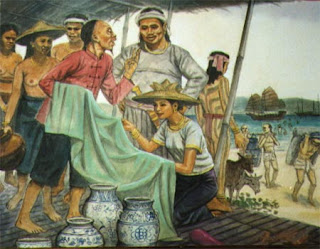 What interested me is the explanation of Filipino slavery, namely the alipin in Tagalog and Visayan oripun. These were not slaves that were owned like chattel by masters. Rather, the pre-Hispanic Filipino slavery system was maintained by debt.


Note - debt. This is a familiar thing in Filipino situations today.

If a man owes someone something, but for some reason cannot pay back, he instead renders slave service, a system that could be called indenture. There were different levels of slavery, depending on how much is owed and the social position of the person owed. If the person was a datu, that was probably going to be a looooong term of servitude. There were real chattel slaves, like captives from raids, though they were probably not more than the alipin/oripun.

And slavery does not end with a slave's death... if he has a son, the status passed on to him and he becomes the slave! It probably happened with some slaves from debt, although this surely happened with chattel slaves. Here's one of the old pre-western Filipino principles - debt can be passed from father to child, or person to person (upon death).

What Scott's study here tells me is that some Filipinos seem to be living in the past. They incur debts and don't pay by money because their culture is used to the idea that you can pay it off by work, or in today's terms, favors. Or in another sense, Filipinos are not just used to paying back money. Paying back by favors seems to be a throwback to the old attitude of the oripun system.

Stop living in the past. If you have a debt in money, pay in money, not by favors. Don't replace one thing with a poor substitute. We are in a Christian environment now, not in the old non-Christian oripun manner. And transferring debt and slave status to a child or another person for a replacement is certainly not Christian. As Paul wrote, let there be no more slaves.

This shows that if you are in debt, you become a slave. So pay your debts.
Posted by Unknown at 9:53 PM