The Pinoy Claim to Sabah 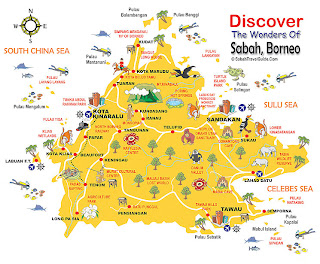 I recently read in the newspaper that one of our local representatives, Bongbong Marcos, son of the late dictator Ferdinand Marcos, wants to revive the Philippine claim on Sabah. When I read this, I was incredulous. We always have problems with places like the Spratleys, and other internal affairs, like the ZTE scandal and others, that we could hardly solve. If we have these, why should we bother with something like Sabah?

But before I concluded, I decided to research on the matter. A look at Wikipedia reveals that Sabah was part of territory owned by the Sultanate of Sulu, given by the Sultanate of Borneo. Basically, the Muslims of Sulu own it. Then comes the Austrian Gustavus von Overbeck, who obtained a lease from the Sulu Sultanate to Sabah.

However, it seemed that the Sulu Sultanate did not give much notice or effort to maintaining Sabah, and later it became a British colony. The U.S. even reminded Britain in th 1920s that Sabah did not belong to it, but the British Empire continued having it until post-World War II, when it had to cede territories for survivial. Sabah, instead of being given to the Sultanate of Sulu, was given to Malaysia, and a pro-Malaysian government has been ruling since then.

But in the 1960s, during the Macapagal administration, a meeting occurred between Philippine and Malaysian delegates to try and get back Sabah. That didn't work out. Sabah today continues under Malaysian control, and based on current surveys, the populace like it under Malaysia.

Now someone in the Philippines wants to get it back. The Sultanate of Sulu, which is under the Philippines, also wants Sabah back. In fact, Malaysia is said to be paying rent to the Sulu Sultanate to keep Sabah in its paws. Now the question is... is reclaiming Sabah good thing to do at this time?

While I believe the claim of the Sultanate of Sulu has some backing based on history, I don't think trying to claim Sabah now is a good idea. Basically, I stick to the same argument above - we have too many internal problems. And these problems may even cripple our capability to hold Sabah even we win it.

Just look at the Philippines. Prices are skyrocketing like crazy, but salaries are not rising with them, forcing people to seek higher salaries out of country, just leading to the greatest export of the country - labor. The ZTE scandal shows that even the highest officials of the country, or in general, most of the officials of the country, are corrupt and are contributing to the country's deprivation. Internal squabbles are aplenty and the public's faith in the government is almost gone. How can such a country handle volatile external affairs if it can't handle its own affairs at home?

Someone suggested seizing Sabah through military action. But how can the Philippines use military action over Sabah when its Armed Forces are in a run-down and sorry condition?

First, we must improve our economy and politics. Do away with or severely reduce corruption, improve our Armed Forces and make the government reliable and faithful to its people. Then we may have a better card to play in reclaiming Sabah.

But even if we do claim it successfully, we have the Muslims to deal with. I don't think they like the Philippines government one bit. And military action... is a bad idea even if we have the power. Why?

The Philippines stands out like a sore thumb in the middle of Southeast Asia. Why? Because its the only predominantly Christian country in the region. Almost everyone else is Muslim-dominated. Malaysia, Thailand, Indonesia, Borneo, even Sabah itself is Muslim-dominated. So whether we gain Sabah or not, the Islamic population of Southeast Asia stands against the Philippines. And as stated in the Wikipedia article, most of the Sabah populace are in favor of Malaysia. They know the Philippines isn't too kind on Muslims, especially after 9-11. They may even rise up in rebellion if we come in to take over. So military action on Sabah is not just risky... it's downright inviting trouble

So I say, leave Sabah alone first. Let's attend to the more important things in Pinoy country.
Posted by Unknown at 3:18 PM