Another Perspective on the “First Murder”

The Biblical account of Cain and Abel, considered the first murder, has often been thought of as a case of jealousy. Cain is thought to have been jealous of God’s reaction to Abel’s offering. Indeed, God’s reaction is longer to Abel than to Cain. Cain saw it as favoritism, though it isn’t. So the usual lesson taught is that God does not play favorites, despite us believing differently. But there could be another angle to it, that still sticks with the message of the Word. 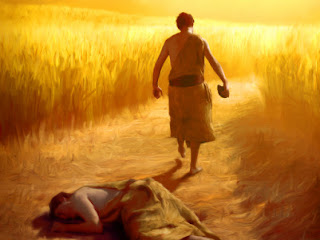 Cain, however, didn’t like it. He knew about justice. He knew God punishes sin. So why didn’t God punish Abel? So Cain decided, I’ll punish Abel for God. So he killed Abel as a way of taking justice into his own hands.

Let this sink in. What if we have our own concept of justice and we let it twist us? What if we just want to hurt and kill people to enforce our own brand of justice?

Cain’s sin in this reading would not be jealousy, but lack of trust in God’s justice. He believed that he should take justice in his own hands – even if what would actually turn out is not justice. Cain also wanted to control justice, and as I said in my earlier article, that is where human wrongdoing starts – the desire for control over others. The more we desire control the more we tend to sin or do wrong. The moment we drop our desire for control over others, that’s when a true happiness-oriented attitude in our lives starts.