Control-Freaks Are the Ones who Ruin the World

Have you, believing you are in the right, wanted to enforce your view of this on another person? If you find someone who disagrees, you are so angry with them that you will start to hate them, want them removed from your sight or life? And, when you reach the breaking point, want them killed? That’s probably the way a control-freak feels. 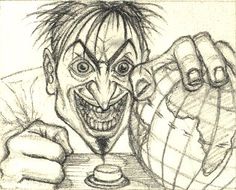 Have you balked at someone else’s choice of music, food, books or clothes? Has someone’s taste (or lack of) shocked you? Have you wanted to step into lives and tell them what music to listen to, what food to eat, what books to read or clothes to wear? Did you want to do this because you didn’t want to be “offended” by their taste?

If you dislike a colleague’s working style, have you snapped and said to them, “your way sucks! This is how you do it!” And you do it arrogantly. Some people say the same thing when they see a friend’s lifestyle they don’t like. They feel like they have the right to order the friend around and make their lives “better.” They have always dreamed of seizing control of someone and direct them, and perhaps when the friend does benefit from this control, the friend will thank them and they can be so proud of themselves and boast it to the world. They probably want to be like the hosts of “Queer Eye for the Straight Guy,” only they want to do it by force.

You’ve probably heard someone say, “I know you better than you know yourself. So do as I tell you!” or “I’m disgusted that you think that way. You’re a disgusting person because you don’t react the way I want you to!” Or, “How dare you act like that towards me! When you talk to me, you do it the way I want you to! Give me the manner and respect I want!” So they will want to dictate you and try to run your life for you.

Other examples:
“Why aren’t you outraged at the same thing I'm outraged at? You’re on the side of evil aren’t you? That’s it! I won’t accept any explanation from you! Either you’re with me or against me! Fuck you! I’ll bring you down!”

“I believe everybody should be nice… so I will force them to be nice!”

If you’re like the above, then you are among the people who are making the world hell.

People who believe their sense of what is beautiful, good or true should be imposed on the world, and that they should control other people to do so, are the true villains of the society. They are people who are controlling. Thus, the evils of the worlds often come from control freaks (also called megalomaniacs). People who want to dictate and control others, believing that they’re doing good, are often the one who turn into the abusers.

Think of events like Hitler or Pol Pot killing masses of people to cleanse the world of them. Terrorists crashing jets and killing people on September 11, 2001. The massacres in Srebrenica, Rwanda and more. But it need not just be violent. Imagine, for example, a person who loves The Secret is so annoyed by a debunker of it, so she makes a fake story about the debunker that leads him to get trolled or hacked so he won’t interrupt her plans to make the world appreciate The Secret. Or a pro-gay activist offended by someone simply mentioning his discomfort being around gays makes the activist lead online flaming and bullying against the person. Or a . You might say, these are simply evil people doing evil things. Oh, really? Turn it around and think of it from their own point of view. They do their evil things because they believe they are doing the world a favor. Thus, it should be said: people who believe they are doing the world a favor are among the likeliest to do evil. Their view of a “better world” is usually a nightmare for others.

Others will say things like, “I want to control you because I love you!” Perhaps sometimes we like to shout that to others because we feel we are so good. That is actually one of the greatest lies ever said.

Of course, there’s nothing wrong with telling a person what you think is good for them. There is something wrong when you’re imposing it or forcing it on them.

Now I understand the meaning of “the road to hell is paved with good intentions.” People who believe they can make the world better by remaking it according to their own desires are usually the ones who tend to make it worse. The people who want to change the world tend to become the villains.

What’s wrong with controlling someone if they are doing so terribly in your eyes, you may ask? That means you don’t respect that other person, and likely don’t respect other people as well. Thus, you may be acting like an asshat to others, but believe you are still a “saint.” It’s is also likely that you are hurting others and violating their rights. They are violating the right of others, all for their “better world.” They might even be “activists” for human rights, but their wanting to control others contradicts what they claim to be part of.

But you think this only applies to people in power, like politicians, you are mistaken. Even the young teen, the aggressive churchgoer, the activists (like in my example above), the beauty-loving hippie, overbearing office manager, and more. Maybe it’s the 1960s, the flower-power, the pot or whatever they’re been taking in (not just what they smoke, but what they read and watch). Maybe it’s also the product of commercialism, which has made people believe they are, for example, saving the environment when they are just actually buying a product that saves nothing.

Perhaps what makes my message so disturbing for some is what I imply above: the attitudes that evildoers and dictators have are the same as what ordinary people have. They just differ in the resources at their disposal. We ordinary people have the same desire to “save the world;” but it will likely be a nightmare for someone else. And yes, that’s what evildoers and dictators likely believe they are doing: saving the world.

The Messiah Complex often leads people to do wrong, because people often develop the complex on their shortsightedness. They only see themselves as having the right answers and the right thing for all. They believe everyone must follow them to make this world better. I would say, they want only comfort and pride for themselves, and are only getting other people to provide these instead of working for it themselves.

I think one of the greatest sources of insecurity to human beings is the fact that others are free. Because people are free to disagree with them. They can’t take disagreement. So they lash out. But they’re still in the wrong for doing so.

People should just accept that we are all different. We can’t have the same culture, beliefs and persuasions all throughout. We’re a melting pot of competing interests. We’re meant to be that way for balance. History has shown that a community where everyone follows the leader like automatons and where everyone is of the same culture or persuasion in the same manner would actually be destructive. Examples would range from the purges of Joseph Stalin’s Soviet Union to the People's Temple and other cults.

I define politics as the art and science of controlling other people. Based on this, I can see why everyone is so crazed about political power. They want it so they can force other people to do what they want, or to stop them from doing what they don’t want. It’s also no wonder libertarians and other such people are so much against people having political power at all. They see that no one has the right to force anyone.

I believe in having government around, authorities to catch cheats, murderers, liars, slanderers, thieves and more. But I also see their purpose as to (what an ironic use) control control-freaks. Sadly, government did get into the hands of control-freaks, and they make it corrupt. But government is better used to prevent people from forcing themselves into the lives of others.

I sure wish we can rid the world of control-freaks (if I were to be asked a sinful question, what kind of person would I tend to kill, instead of a rapist, thief, murderer or such, I go for a control-freak… because in a way, criminals display control-freak behavior by commiting crime). But then, with that being the violent solution, I would have to shun it for the more reasonable one: Just be the change you want to be. Be the example and don’t impose it on others. Demonstrate it, and let others decide whether they want to follow. Give up your pride and your sense of entitlement to things.

This for me is where religion, or better yet, spirituality, comes in useful. Many belief systems and wisdom snippets tell us to be humble because we will leave the earth later on anyway. The world is not ours. We don’t own it. Sometimes, we don’t even deserve the happiness or good feelings we seek. We are not entitled to them. We work for them, and if we are unable to get them through our normal

“The world is your oyster” is rubbish. The world is an oyster shell meant to clam us up if we mess up. That would be better. This is why many messages on my blog try to beat down these “inspirational” and prideful messages. This kind of pride that leads to control-freaking is one of the world’s evils that disguises itself as something that is a “natural” part of our human self-esteem. But it has to go. This message may seem hurtful to some, but sometimes, the truth and solution hurts. Medicine that works can be bitter. Admittedly, I was one of those control-freaks when I was younger. But going through the hardships of life taught me better.
Posted by Unknown at 1:50 AM