It's probably painful to hear the word "putang ina" as it is the strongest cuss word in the Filipino (or rather, Tagalog) vocabulary. 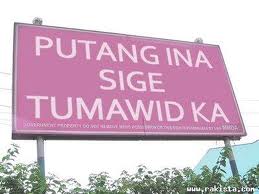 But to me, it is one of the most representative parts of our culture.

Cuss words are a very telling aspect of culture. Cuss words most likely originated as words people exclaim what they have extreme emotions about. "Shit" and "fuck" can be seen as two extreme ends in indicating what people hate (shit) and what they love (to fuck). The two cuss words above are identified with American culture. But in the Filipino culture, "putang ina" is the defining cuss word.

It means "adulterous mother." Basically you saying that the other person's mother is adulterous. It seems almost the same as calling them a bastard. But it has already gone beyond that, and many Filipino use it for any moment calling for an extreme reaction.

In fact, it seems that Filipinos use it for both bad and good situations. When a Filipino learns that his millions were swindled, he might go on a rampage in his home or office, screaming "putang ina!" hundreds of times. When a Filipino wins billions in the lottery, he can jump for joy and scream, "putang ina! Nanalo ako!" So from this point of view, one can say that "putang ina" is a defining part of Filipino culture.

I had my own musings though about the use of "putang ina." One of them is that it reflects the character of Filipino culture. In history, we know that many of those who are mestizos or mestizas, who Filipinos who have foreign looks, were often bastard children of Spanish friars. So much of the "better-looking" parts of our society are actually results of bastardization.

Another is that the Filipina, or many of our women, are known all over the world as prostitutes. Because of the hardship of life in the Philippines, they go abroad to work. But many, after working a legitimate job, go TNT (tago ng tago or hide-hide) become prostitutes. Perhaps this pays a lot better than many other legitimate jobs. But it is a too-high cost to pay just to have something to eat and send the family at home, as one's dignity is sacrificed. Sometimes, we can't blame the women themselves; they have been manipulated to get into a this job, while being blocked from ways out.

My thesis is that "putang ina" as a cultural artifact represents the dysfunctions in our society. There remains a lot of sexual immorality in the Philippines, despite its being a predominantly Catholic country, and a large part of its populace has to turn to prostitution due to hardship. And the sad part is that this is likely considered a "normal" thing by much of the populace.

An irony in the Philippines is that some people hate foreign influences, but fail to realize that what they use is actually foreign-originated. So when Filipinos say "putang ina," they are using a term borrowed from Spanish. Spanish-speaking countries have it in the form "puta madre." I myself didn't know earlier that puta is a foreign word.

However, I would disagree if people say the dysfunctions of our country come from abroad. Rather, it is the attitude of hatred against things abroad that is another cause of dysfunction in our country. Also, Filipinos tend to embrace their dysfunctions. Rather then fix them, they tend to use these dysfunctions to make excuses to not work and look for dole outs.


Back to the word itself. Considering the context of cussing: do we need to do it?

How you cuss of course tells others what you are. You say "putang ina" very often, for even ordinary things... well, it may not mean you are adulterous, but it can show that you lack the self-control to use proper language.


By the way, don't miss "Minsan may Isang Puta," now an indie movie, by the ingenious Mike Portes.
Posted by Unknown at 2:52 PM