I remember an acquaintance telling me something about Steve Jobs before the Apple icon's death. He said Jobs often talked down  his subordinates, insulting them, saying "you're nothing," and demeaning and humiliating them to tears. What's worse, my acquaintance supported this and said that this is a good way to motivate people. 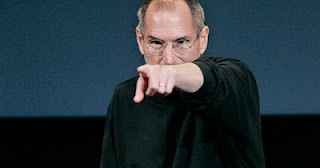 "So if you want people to do things right, you have to humiliate them," he said.

So my acquaintance I assume uses this approach in life.... and last I heard, he gained a lot of enemies online. He also never became a top executive. Sad that he does not see, being "bad" does not really pay.

One thing that happened to Jobs: he died early. Lately, there's this article linking cancer to stress (well, there have been countless articles already). I assume Jobs stressed himself (as well as others ) with his behavior that he soon paid for it. Well, I can't be absolutely be sure about it - and I can't say it's "punishment" for what he did - but I'd say being a jerk certainly can do a lot more harm than good to one's health.

Sure, Apple may have become a big company. But I'm sure it wasn't just Jobs who brought Apple to the top. There's more proof now that Apple thrived in spite of, rather than because of, Jobs' bad behavior. So people may say, what Steve Jobs is good and got his organization going. Did it? I am a skeptic. Jobs' reported demeaning behavior is absolutely something to avoid. Instead, we should learn to be kind but firm in a manner that commands respect, not fear. There are many other leaders who did it this way. Bring people up, not down. Sorry, but there's no proof that trying to emulate Jobs' treatment of others is working. Give it up already.

Perhaps if Jobs was responsible for his company's success, it was because of his vision and marketing skills. Not because of his treatment of others. Yes, Jobs and Apple were successful in spite of that.
Posted by Unknown at 2:32 AM