The Problem with Filipino Pride 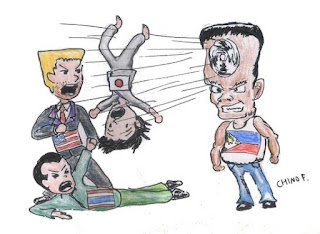 Many people who know me will be aware of my stance on the Filipino Pride subject. I’ve discussed it many times before, but I’ll make a simple stance explanation this time.

Recently, the Filipino Pride issue arose again due to the Bayo campaign which many slammed as racist. Some just say it’s poorly written, though with a good intention to try and find something to be proud of in being Filipino. I disagree. Much as I disagree with saying Manny Pacquiao is a great boxer because he is Filipino, with supporting someone just because they have Filipino blood, or that Filipinos are the best nurses/singers/anything in the world. And with how Filipinos reacted during the Aug. 23, 2010 Bus Hostage Crisis. I believe the Bayo ad’s message is flawed since it hinted at being “proud to be Filipino” again.

I don’t like the “proud to be Filipino” attitude because it is plain arrogance for me. One blogger excellently summarized the problem of pride in Filipinos. It is not a good thing to look for pride, because that is often the result of hubris. Experience shows that the more Filipinos look for pride, the more they tend to be humbled. Looking for pride also makes one look like an airhead. It’s even a funny irony that some Filipinos boast that they are humble.

I believe the reason why Filipinos tend to engage in Filipino Pride initiatives is that they actually feel inferior. Because, logically, would you look for ways to be proud if you were already proud? It’s more logical to say that you were looking for ways to be proud or express your pride if you felt inferior, because that’s often the purpose of deliberately looking for pride – covering up inferiority.

A friend of mine spoke this great peace of wisdom: if you are really proud of something, you wouldn’t say it. You’ll just do it. If a person was really proud, or has the proper kind of pride, they would not look for ways to proclaim this pride. Rather, they would keep their head straight and do what they do best without consciously trying to make it Filipino or anything.

If people would say, “the Americans/others imposed on us that we were inferior as our colonial masters and thus we should assert our pride as Filipinos,” I would still say no. Because that means you fell into their trap. You believed them. You bought into their rhetoric.

If I were asked, what do we do now, I’d say, just forget the Filipino Pride thing and do well in whatever you do – whether related to being Filipino or not. The best thing to be is yourself. Because in the end, when we peel off all the nationalities, we end up human.