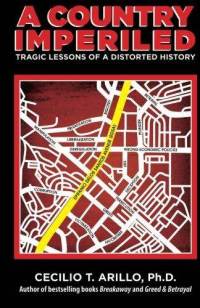 Cecilio Arillo’s Greed and Betrayal was one of the seminal works that attempt to expose the first Aquino government as a corrupt regime bent on revenge and self-enrichment. His method in the book was merely dropping of facts, following his training as a journalist. Later on, I heard he had released a new book to follow up his work.


A Country Imperiled looks at the bigger picture (it is a bigger book than Greed and Betrayal) of the history of the Marcos downfall and Aquino administration – and the subsequent deterioration of the country. Its subtitle “Tragic lessons of a Distorted History,” reveals its main thesis: that Marcos was a dictator is a distortion of history and his successor should instead have the title.

The book starts with a recounting of world history and how economics shaped the world. Arillo makes the argument that mercantilism led to the rise of industrialized nations which became today’s world powers, and that neoclassicism led to the recent financial crisis and the poverty of the Philippines. He also makes the assertion that industrialization, and not agricultural development, leads to growth in a country.

Arillo next describes Ninoy and Cory Aquino in his own words. Ninoy is cast as a warlord, a typical trapo, who was responsible for the Hacienda Rodriguez robbery and failed to live up to expectations of him as a promising politician by supporting his wife’s family’s agenda. Cory Aquino is cast as a protector of her family interests, and is willing to be so at the expense of the country.

The book then makes an interesting comparison between Marcos Era economics and today’s economics. Arillo says under Marcos’ protectionist and largely government-driven policies, the Philippines’ thrived. He shuns cronyism as another false accusation, saying that what really brought the country down was economic sabotage from without, engineered by American elements. He also uses the local power industry as a demonstration of his explanations (Especially with what’s happening in Mindanao!).

Based on Arillo’s account, Marcos’ efforts to de-power the oligarchs were part of an honest attempt to improve the country. The oligarchs were angry at Marcos for this, since it meant their greed would be checked. Thus, they conspired with some American help to have him removed, using the story that they were “oppressed.”

Arillo also holds to the belief that US backing, and not “People Power,” was largely responsible for the success of the 1986 EDSA Revolution. He provides accounts of the involvement of US politicians George Shultz and Stephen Solarz from behind the scenes. He claims the Light A Fire Movement was an actual terrorist group and was responsible for the bombings during those days. International media also conspired to run propaganda stories against Marcos. I should say, perhaps the most obvious proof of American involvement was Marcos’ being spirited away to Hawaii aboard American aircraft.

About the writer, Arillo himself admits he was a suspect in the 1989 coup d’etat. He gives no statement on whether the charges are true or not. But I could understand it if he took part, given the frustration one would have after realizing the state of the nation.

Perhaps today, many people share this frustration with the second Aquino administration. Arillo says history has been shrouded in historical distortion. EDSA 1986 was not the toppling of a dictator. It was nothing more than a power grab helped by a foreign power, and it was not a revolution, but a restoration of old inequalities that Marcos tried to solve.

I will admit the impact of this book on me is profound. Arillo blames the poverty of the Philippines partly on the agenda of the International Monetary Fund and World Bank, which is dominated by neo-classicists. Others have said this and I had long been skeptical of it. But after seeing Arillo’s explanation, I can now understand why some people reject economic liberalization and 100% foreign ownership of businesses. I was also once skeptical of the American role in the removal of the Marcoses; now I find it more convincing given Arillo’s accounts. Arillo says Marcos was not an American ally; rather, Marcos opposed the policies of the IMF-WB, which favors American interests, and he paid for it. Another thing is that I can more appreciate Renato Constantino after earlier branding him as a leftist, as he is oft-quoted by Arillo on the Marcos aftermath.

The real surprise to me in this book was Arillo seemingly adhering to the beliefs of nationalist economist Alejandro Lichauco, who espouses protectionism and rejects economic liberalization. This came as a sort of blow to someone who supports economic liberalization as I do. But then I saw that he wanted the Philippines to become a highly industrialized country, which sits well with me.

Lichauco also sees problems with the Constitution. He agrees that Article XII is problematic, but more because of its self-contradictory nature. Of note is Sec. 1, par. 2 which says the country should industrialize, but must do so through an agriculture program. This is contradictory since raising crops does not create factories. On foreign investors, Arillo says the Foreign Investment acts of 1991, which allows 100% foreign ownership of certain businesses, is an Aquino legacy, contrary to what some people including myself believe.

Arillo also slams the Catholic leaders in the Philippines, saying that they support the oligarchs since they own stocks under some of these oligarchs’ companies. This is said to be the main reason the Catholic Bishops Conference of the Philippines supported the Aquinos. Arillo also finds it strange that while the Vatican rejects the policies of free trade, the CBCP does not. In addition, Arillo says the Vatican ordered the CBCP to stop meddling in politics, but the CBCP refuses to obey. Arillo also calls the Catholic Church the "world's oldest surviving transnational corporation."

While one may shake their heads in disbelief after reading it, much of the information seems reliable. Some stories are not new, such as the IMF-WB thrusts and the disobedience of local Catholic leaders. But Arillo brings it all together, and gives the whole story in one book.

While Arillo, may be seen as a Marcos apologist, the information he gives in the book deserves a long look. I can also understand why my parents back in the day cautioned me against support Marcos’ opponents – the old people seem to know something that tends to be hidden today. They believed Marcos was doing something right. Hence the comment, “Buti Pa nung time ni Marcos (It was better during Marcos times).”

While I hold on to my earlier ideas, I keep an open mind out for signs that Arillo may be right. His explanations seem to hold a lot of water. This latest book also seems to have more of his opinion than Greed and Betrayal did, but it can be distinguished from the fact. Who knows if his opinions prove to be right one day – thus, it seems best to watch the signs of the times and see if they prove Arillo right.


Update: Apr 3, 2012, added a sentence to the Catholic Church paragraph.