On Being More "Robotic" 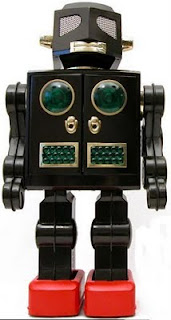 Transformers 3 is over, but it still prompted me to rewrite something I did after the first Transformers movie. It was about my belief that people should learn to be... well, a bit more like robots. But not in the way you may think.

This is based on the classical image of robots as having no feelings and having only logic. But I rather see robots as logical and careful, even if they develop artificial intelligence and emotions. Realistically, they are likely to commit less mistakes in my view, thanks to some advanced computing (read: thought) power. My point really is that people should learn to control their emotions more and use logic rather over their feelings. Letting feelings take over has resulted in great tragedy for humans.
I remember watching an old movie or TV show in the sci-fi 50s tradition, wherein humans fought against enemy robots. The humans were annoying; they bickered and fought amongst themselves, while the enemy robots showed logical thought and careful coordination, and so were prevailing over the humans at first. By the end of the movie, even though the humans would win though luck, I was rooting for the enemy robots. I hated how stupid human characters tended to be.
Unfortunately, a lot of movies have scripts that downplay careful thought and encourage letting emotions take over. Thus, they encourage people to think with their feet and do what they feel. Very few movies encourage logical thought. The same seems true with literature.
For me, one of the ugliest things about humans is the way they express their emotions. Or more like, how they let themselves be controlled by their emotions. I see this in our world literature. A lot of it focuses on how emotions take over human actions and lead them to wrongdoing. Works of the Romantic Era like Wuthering Heights are typical of this, as do the stories in the Iliad and the Bible. But even real life examples show the folly of failing to keep emotions under control. Literature and history for me are the same in one thing: they record the mistakes of humanity.
Most people now may ridicule logical thought, saying that it is cold, hard and inhuman. But when people are given to their emotions, their actions can also be cold, hard and inhuman. I blame entertainment media mostly for this, which is why I don't like watching movies anymore.
Thus, I believe people should try to be more like the robot characters who act based on sound logic and careful thought. At least follow's Data's advice after he was able to deal with his newly-installed emotion chip: learn to control your emotions.
Posted by Unknown at 12:25 AM