The Myth of More with Less

After the Asian Currency Crisis struck in 1997, and after other austerity measures were implemented in other parts of the world, everyone decided to join the bandwagon of a certain popular business concept borne out of desperation: make more with less. 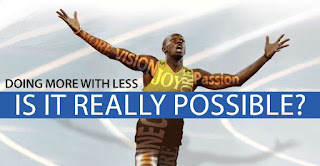 Imagine a company with 25 employees making 5 projects a month. It later gets cut down to 15 employees but makes 12 projects a month.This is a projected success story of more with less. Managers in the Philippines especially seem to dream of this every day.

Because of the crisis and new views on austerity and wastefulness, cut downs and layoffs have never been more common than in today's era. In the United States, you hear of companies making massive layoffs, such as when they have made a major merger, or when they have found their profit shrinking in light of their expenses (probably the CEO found he couldn't make his regular trips to Monte Carlo if he doesn't cut down).

Then the employees complain that they cannot keep up their expected output with fewer people and resources to work with, the management will reply will all this motivational baloney, that “humans are amazing creatures, they can rise to any occasion,” or any other sugary pep talk that has the underlying meaning of “do as I say or else!” It seems no different from the Roman or Egyptian slavemaster whipping a 90-pound slave to carry a 500-pound stone block.

In other words, modern managers and executives are missing the point of the people who originally taught “more with less.” The real premise behind more with less is that you have redundant or useless positions or resources. You have ten men working a machine that could be operated by five. You have a plastic mould machine and a metal mould machine , but your business is only plastic moulding. So cut away the unnecessities! Reduce the crew to five, remove the unnecessary equipment. Also, here's something many managers miss with the real meaning of the originators of “more with less.” Processes, techniques and procedures are themselves modified to increase productivity. It's not all numbers. It's also action and quality. Actually, this isn't more with less. It's more with enough.

Some managers go overboard. They cut down the five men further and make it three, using the motivational bullshit to make one man do the work of two. They sell both the plastic mould machine and metal mould machine, and get a smaller plastic mould machine, while expecting the output to be the same for the bigger machine! And they don't even change procedures with more efficient ones! They don't even raise the salaries of the people who are forced to do the job of more than one person! More with less? It actually became less with less!

The problem with the expectations of some managers and business owners today is that they think people can take anything thrown at them. The inspirational and motivational hogwash popular today has made them believe that since people are not machines, and machines have limited capacity, people don't have limited capacity and should have the ability to take any workload. They will claim that one person can do two person's jobs and still be all right. But this is most certainly false.

This is the problem: managers are expecting their rank-and-file to be supermen. And usually for low pay too. That is stressful and overpressuring to the employee, who will be disgruntled, will feel oppressed, will reduce work performance or will leave altogether. It can lead to high employee turnover rates and worse, conflict between employer and employee. High turnover rates of employment are costly to companies, contrary to what some may think. Thus, pursuing “more with less” is not a good policy.

More with Less has been popular in order to cut costs. But why would the managers or executives cut costs? Is it really good for the company or for themselves? I would challenge some executives... are you using company money for activities you call “business,” but are merely part of a wasteful leisure lifestyle? Such as going to another country just to ski or stalk the beach, lodge at a luxurious hotel or play at the Monte Carlo Casino? Sure, you may be helping the airline companies and tourism, but you also may be sacrificing your employees' welfare by denying them raises just so you could have your luxuries. CEO going to Monte Carlo, stop it.

The proponents of this myth would start in their seminars with words like, “hey, it sounds too good to be true, but...” But it is too good to be true! You cannot make more with less. You can only make less with less, and more with more. What truly happened after an example of improved performance after streamlining is that Less with More was cut down, resources were not being used to their potential then but being used so now, while some possible obstructions to doing more (conflicts betweens employees, superfluous positions making wasteful use of resources). It is absolutely not more with less. More with Less is a myth, has always been a myth and will always be a myth.

It's been ten years already since the Asian Currency Crisis, and I wonder if people have learned their lessons about certain myths.
Posted by Unknown at 3:16 PM