The Tyranny of "We"

In one of my latest projects for the sideline, I had to make a book report, and I liked this particular project, because in the process, I found the work reviewed interesting… mainy because its message was in agreement with my own personal philosophy. It was the novella Anthem by Ayn Rand. It was about a society regressed to prehistoric standards (no electricity, just candles), but most notable is the form of government, seemingly a collectivist autocracy that assigns people what they are to do in life. The society is a “We” society, wherein nobody is allowed to even have an individual thought. A single person, such as the protagonist, uses the word “we” to refer to oneself. One person is not thought to be a single important unit, but worth anything only when part of a group. In other words, a person is a mere component. 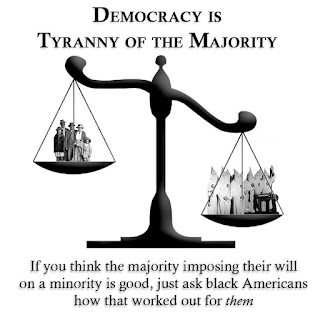 But the protagonist of the story, Equality 7-2521, thinks otherwise. He discovers items of technology from the past, makes a relationship with a female of another community on his own, he rediscovers electricity, and soon leaves his collectivist society with his new wife to make a new life and a new society were everyone recognizes what “I” is.

This is also the theme of another work, We by Yevgeny Zamyatin. The name is Russian and it obviously is also a criticism of Soviet society. Anthem also seems to draw heavily from this book. And obviously, the book is another criticism of the collectivist culture of the Soviet Union. It is about another individual who acts independently from the collectivist One State, which makes all people look the same and manipulates exactly how they live. But his independence is stopped when he is captured in the end and given forced brain surgery, which reverts him to his original slave state.

We is one of the classic works of science fiction, and can be considered the first ever Dystopia – the opposite of Utopia, a society that has degenerated to a point lower than the level of the reader of the work, usually because of a nuclear war, world earthquake or other disaster. However, the loss of individuality of a human being could itself be considered a great disaster. It may be only a symptom in these works thus discussed, but in itself, it is a terrible thing to happen to humanity.

Now why is the loss of individuality a bad thing, you would ask? Because it violates nature. If you're a Christian, or a creationist at least, you will agree that God created each person as an individual. One mind in each body. No two minds would share one body, or else that would be considered an anomaly! Even if you are an evolutionist or materialist, you would agree that that's the way things are. No two or three or more minds share one body. Only one! The “I”!

If you think evolution would lead to two minds occurring in one body or vice versa, I would say you are out of your mind.

This way humans were built is no illusion. Even if you look at it from the eastern philosophy point of view, it sorely ain't true that humans are unimportant individually. We were made or evolved into individuals for a purpose, and to suppress the individuality means to violating nature, disrupt what really is and what purpose it is for.

But now we come to the reason why the “we” mentality disturbs me. One thing that alarms me is the proliferation of many seminars, teachings and practices that promote “we.” Usually it would come in the form of saying that the employee is only a cog in the wheel of the company. The individual wants and needs of the person do not matter. That's the old approach though in bsuiness. Now some people deliver seminars to try to pep people. They would say, we want you to be a person and not just an employee, we care for your needs and we respect... but when they get back to work, make profit even if you have a low salary or you're out of the company! Of course, I understand the reasons for this, but it's also unfair to the employees and selfish of the company.

I think some companies, especially after the 1997 Asian currency crisis (and anywhere in the world too), have become cynical and selfish as to impose low salaries, but at the same time employ inspirational seminars to try and keep a “soft leash” on employees to keep them from complaining about the low salary. It's like fooling them to be in a good mood at work, and and individual squeals or complains, the company pounces on the poor employee. Sometimes they do it without a care for the employee's welfare. “Either you become subservient like the rest or you go.” After all, companies are usually there to profit themselves, not to serve the public.

Creating a “we” culture is just one of the ways members could be kept quiet in a group so they don't complain about the leader. It's a method cult leaders use. They impose a communal identity or mold every member should adjust to, or the members will be punished. An individual who differs will be persecuted. This is common in many groups, even in Philippine barkadas, but it's just plain wrong.

People are enouraged to be careful about these and be aware of the companies that apply inspirational baloney only to keep them in line, not to help them. And companies are encouraged to... be different. Stop creating a “we” culture. Allow each individual to voice their concerns and pursue what they need to. Wait, not just companies. Every communal entity or group in the world has to know this.

But I am not saying “we” is entirely bad. There are times we need to band together and congregate. Many “I's” with the same purpose will best achieve that purpose helping each other. Coming together for a common purpose it good. But this all still starts with the “I.” For example, how could people band together unless at least one of them comes up with the idea. So it is still “I” that has the ultimate governance. Any “we” that snuffs out the “I” is evil.

Allegiance is not an obligation. It is more of a responsibility. Meaning, no one is obliged to someone by nature. But the moment he decides to ally with some, he is bound now by his word and his being true to his belief... that he will keep his allegiance as he keeps his word. But if allegiances violate important aspects of an individual's individuality, that is a time to cry murder.