Shoot... at the Head or Heart

Whenever I want to shoot someone, especially the stupid people I like bashing, I always think it is best to shoot them in the head or the heart. That way, they're dead. Wait a minute... the head and the heart... that's pretty symbolic too. 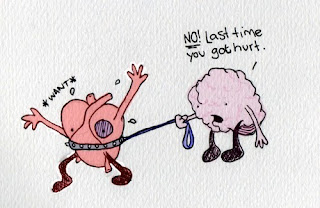 The head and the heart both symbolize two of the motivational aspects of man: the mind and the emotions. It is from these that a man's intentions and sources of action come from. A man with a healthy life has a healthy heart and head. When either of these go down or are underdeveloped, this contributes to his downfall.

Easiest to understand is the failure of the heart. This relates to more than just love. Being a symbol of the emotions, the heart represents EQ or Emotional Quotient, the measure of a person's emotional maturity. When a person is emotionally mature, he makes good decisions and avoids rash, regretful actions. Emotionally immature people are those who make foolish decisions, act without thinking, go into crime, etc. Thus a person with an unhealthy heart (see how far the analogy can go and still be right?) will lead an unhealthy life.

What emotional immaturity can lead to: desiring things that one cannot have (and should not have); making decisions out of whim and not careful thought, leading to disaster; acting irresponsibly towards problems in life. And of course, not doing things right.

Now the head is the seat of intelligence and thinking. Now in this anti-intellectual country called the Philippines, many people believe that intelligence is only a decoration, something to flaunt to people. Hence ordinary people tend to praise someone's intelligence especially when he has high grades in school, though high grades are actually not a reliable indicator of intelligence.

Intelligence is a need, not a want. It is a needed faculty in life. Without intelligence, we could not live correctly. We would be doing the same dumb things over and over again, and would never learn. There are things that are false and things that are true, and if we are too dumb to know the difference, we would find ourselves deceived by the false. We need to be intelligent, because it is needed for survival.

Don't believe movies like "Forrest Gump" or "Dumb and Dumber" when show that even very dumb people can get far in life. Sigh, when will people realize that movies are actually far removed from reality. Dumb people in real life actually cause problems. Because they're dumb, they don't do things correctly. They do it any dumb way that comes to mind (if they have one) even if it doesn't fit the situation at all. Imagine: blaming a rape victim for wearing sexy clothes to explain why she got raped; going into business without any capital or money, just thinking that motivation and gusto are enough to be successful; or creating a modern building without any metal support or with inferior materials, that it collapses later when overcrowded. All these are mistakes of lack of intelligence, and you see they cause grief and misery. No joke about it.

That's why when you say, shoot the person at the head or heart and he's dead, this applies to the symbolic side as well.

So let me remind you, don't ever get shot in the heart or the head. Keep them both healthy. So that your third component - the hand, symbolizing action - stays healthy as well.
Posted by Unknown at 3:11 PM