Why the Filipino Fixation on "Love" Songs?

I've always thought Filipinos are so unnecessarily hung up on love songs. No matter where you go, whenever there's a karaoke, Filipinos seem to like avoiding the fast music, unless it's a current hit or just to break the string. Because the string is usually always love songs or slow songs. I don't know what gets Filipinos transfixed on love songs. I don't know if a myth is circulating that being fond of love songs means being a loving person. But that's baloney. I also believe many rapists in the jails are love song freaks, too, and sing the same things in the jail karaoke. 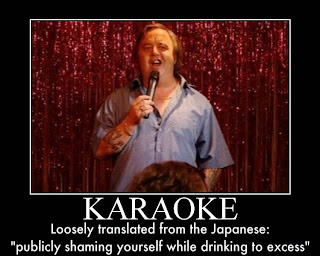 One thing I posit is that love songs may represent the true sexual appetite of Filipinos. Many people comment that the ballooning population of the country is due to Filipinos being unable to control their sexual appetites. That is a problem often observed of Filipino, they lack discipline that they are unable to control themselves. They like "love" songs because they like to love too much. Perhaps that explains the rapists in the jails (again).

And of course, singing is “pogi/ganda” (handsome/beautiful) points. Perhaps Filipinos believe they are more beautiful with a good singing voice. Baloney. Let me also make it plain that I'm not an appreciator of vocals only. I like the whole thing put together, the music, instruments, composition, recording performance, and all. Not just the voice, that's only a small part of things. And besides, if you're good in singing, it doesn't mean you're a good person (back again to the rapists in jails).

Perhaps commercialization has also won out on this thing: Filipinos are being deluded into believing that being good in singing is something that will lead to “success.” Meaning, they believe they can get get rich and famous for being a singer. Much effort is put into promoting things like singing contests and other programs that try to encourage Filipinos to pursue singing as a career rather than do more meaningful jobs. And this is because of the perception (perhaps mistaken), that he or she sings better than anyone and can boast or put down other people. This fascination with singing makes people so full of themselves that they begin to desire this “easy life,” then scream that they're poor or pitiful when they don't get what they want.

For one thing, this trend causes singers to be overrated in the music world. Guitarists, drummers and other great instrumentalists are being pushed into the background. That's an ugly thing in music for me. So Filipinos are encouraged to become so full of themselves, ego machines, in singing, and become airheads (Pinoy Pride). Also, Filipinos scream Pinoy Pride when a Filipino singer becomes famous in other countries, but when the singer was at home, they rejected that singer, or judged them inferior.

Of course, there is a lot of consumerism associated with it, in the form of Magic Sings and karaokes aside from music albums. Perhaps it's a no-brainer that the music industry likes to limit your choices and make you appreciate only this thing because, simply, it affects your consumer habits. So you are made to think only R&B and vocal oriented singing are the only good things, and all the hardworking, better-sounding and competent rock, synthpop, instrumental jazz, blues and others are ignored. Besides, I'm one who believes the main part of any music is the non-vocal instruments, not the voice. So if you ask me, “do you think my voice is nice,” and I say no, you have no right to get mad.

If you're too wrapped up in your own singing, you're not just half-full, you may be all-fool. Yeah, right, call me negative or seeing the glass half-empty or something. Me, I think I'm just being honest.