It's been a while since the article “8 Mind-Blowing Realities No One Told You About Informal Settlers” was published on 8-List, probably as a defense for squatters (Sorry, I do not accept “informal settlers.” Maybe “illegal settlers” is better). I couldn't immediately put my foot on what's wrong with the article, though I said that it seemed “leftist.” I was not able to explain how it seemed “leftist.” With a little more time available now, I'm able to make a brief point-by-point rebuttal of this article which, though well-written, seems misguided in my view. 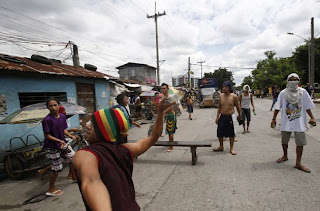 8. Informal Settlers Pay for where they live – Maybe some but not all. There is actually the case of professional squatters. Those who rent out their “houses” that are not really theirs, but they earn the money, instead of the lot owner. It results in a sort of “double squatting.” That is unjust.

7. Informal settlers hold legitimate jobs - Some, but not all. Also, holding a job does still does not entitle you to live on land that is not yours, unless the land or dwelling owner agreed to let you live there.

6. Informal settlers do pay taxes - Some, but not all. Those who pay taxes had better campaign for the government to give them what is in the next item:

5. Affordable and accessible public housing gets rid of slums – I agree public housing is a solution. Too bad the last project like this, like the Bliss project, went dead, and practically nothing replaced it. Also, not all squatters are accepting the affordable housing – since some of them want “free” not affordable housing. Lastly, giving houses for free does not register well with taxpayers, who are experiencing great difficulties with urban life today. But I an open to squatters buying the land from its owners, if they can afford it, and if the owner is willing.

4. Squatting is older than you think – but that does not de-problematize it. It only means it is an old problem, but is still a problem.

3. Barangays attract informal settlers for votes – Basically, the problem of politicians getting votes from squatters. Then this should be challenged, perhaps through reform of the electoral process, perhaps.

2. Informal settlers are messy but efficient – Efficient in what? Making a mess. This things highlighted, like recycling stuff and living in small crowded spaces, can also be problems. Like they may recycle old rusted metal that can cause disease or collapse structurally, and small crowded space increase the risk of disease contagion. The problem with this is that it will lower the standard of life for the squatters. And if the next item is spread, this lower standard may spread to everyone.

1. Informal Settlers are the future of urban living – This opinion can be argued against. Just because squatting ( and someone attached the fancy term “autocatalytic city” to squatting) is becoming more common doesn't mean it isn't a problem. It still is. For example, crowded cities increase pollution. Perhaps the article's author is using the population growth argument to support the Reproductive Health Law. No, the problem is “pagsiksik,” or overcrowding.

1. Article seems to imply that squatters should be left alone and even embraced. Something like, since there will often be poor people around, stop making solutions for poverty. Thus, the social problems associated with squatting remain unsolved. Promotion of inaction?

2. Article seems to imply that the taxpayers and those who own land should provide land to those without – which is a tenet of socialism and communism. Some claim it is based on the Christian principle of giving to the needy. But this can be argued against. The Bible talks about feeding the hungry, caring for the sick and elderly and giving clothes to those lacking them... but it didn't say give land to those without. Also, just because you don't own land doesn't mean you're needy.

3. The supposed “8 Mind-blowing realities no one told you about informal settlers” are not mind-blowing, are not realities that we should necessarily accept and... it's not true no one told me. Anyone who is thinking can see them without being told... and can think beyond them.


Some have argued that people should not own land, and all land should be public (communism, perhaps old-style tribal codes). If someone believes that, then they should give up the land they own and see if they can look for someplace to stay. Chances are, they won't and will keep moving. This is likely to result in caveman-nomad living, which may bring back people to the stone ages, because people can't simply hold down a home where they can focus on development.


What I want: Return Presidential Decree 772 or the Anti-Squatting law. Squatting is wrong, any which way you see it.
Posted by Unknown at 7:55 PM