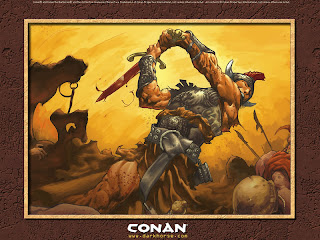 I had a post years ago on the Conan forums answering why I like Conan the Barbarian as a character. The post seemed to have been taken down, so I'm reposting a new version of my reasons, now reduce to four main reasons.

For a backgrounder, I bought a compilation of original Conan stories by Robert E. Howard, The Coming of Conan the Cimmerian by Del Rey Publishing. It's the first of three volumes, and I haven't gotten the other two (The Bloody Crown of Conan and the Conquering Sword of Conan). But this is the kind of fantasy I like reading over Lord of the Rings, Chronicles of Narnia and that kind of "holy" stuff, hehe.

1. He is a violent hero. The reason why you would watch a Conan show or read a Conan story is because you want to see or read about him slashing guts open and creating a large body count. People who complain about the violence are obviously reading or watching the wrong stuff. The reason one would like Conan is because they're after the violence, hehe.

2. Conan is not what he seems. Most people today would think of him as the "big, dumb barbarian." But in the first story of Howard, "The Phoenix on the Sword," Conan was already a king and he was writing in a book. This shows that he was somewhat educated and has a level of sophistication that allows him to keep his kingship... although he does like the battlefield more.

3. He is actually an anti-hero... perhaps one of the first in 20th century fantasy literature. An anti-hero may or may not have a sense of justice, or may not care about people that much, he may just prefer to get his pay after doing the job. Or he has selfish motives. Much like an ordinary person. But they do come across with the evil foes on the job - and they give those foes a severe whacking. In this sense, anti-heroes can be very interesting.

4. He ain't no emo frump. All he wants is his money, his wine, his chicks and whatever he wanted for a job, and he gets it. And he doesn't need to make any emo speeches or drama queen acts like what seems common today. Well, he does get depressed at times, but afterwards, he goes out to increase his body count. Hehe.
Posted by Unknown at 12:01 AM