Not a good thing to teach 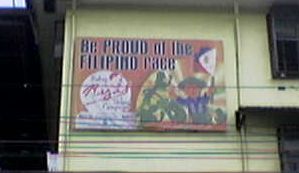 I saw this posted on the outside of a nearby school in Quezon City. For those who couldn't make it out, it says "Be proud of the Filipino Race." Yes, I believe it is the wrong thing to teach.

First of all, Filipino is not a race. It is a nationality.

Second, whether race or nationality, it's best not to be proud of an accident of birth. It makes no sense to be proud of something you cannot control. Be proud of achievements. And just because you're not proud doesn't mean you're ashamed. You just know how to keep your hot air in check.

Fourth, race has been debunked by the Human Genome Project. Race has also been acknowledged as a concept with no more obvious result than to enforce inequality and control of others. It's a concept best done away with.

Thus, this slogan "Be proud of the Filipino Race" is one of the worst things to teach our children. It will give rise to sentimentalist crap that "we're proud of anything Filipino," even if that particular Filipino may be the Versace murderer Andrew Cunanan. Heck, even if the Filipino does something wrong, other Filipinos are still told to be proud - just like what happened after the Manila Bus Hostage Crisis.

Wish I had the clout to tell the school to take this down, but at least this blog post provides an avenue to make people think about these things.

You might want to read my views about what's wrong with Filipino pride on Antipinoy.com:
The Failure of Filipino Pride
Filipinos are not the Best Things in the World
Filipinos, Is that All You've Got?
The Truth About "World-Class" Filipinos
Posted by Unknown at 12:50 AM