Can’t Pinoys be famous for anything else?

We always laud Pinoys who make it big with their talents and capabilities and not with their corruption and mistakes. There’s Lea Salonga who’s an internationally renowned singer. Charice Pempengco is yet another singer. Same with APL of Black Eyed Peas and Jasmine Trias. Of course, there’s Manny Pacquiao in boxing, and Bata Reyes and Django Bustamante in billiards. The latest is Efren Penaflorida, whose CNN award can be considered controversial, but Pinoys make a fiesta of it nonetheless. But besides this, we hear little of other Filipinos who are lauded abroad… and rarely are other achievements mentioned than these.

Isn’t there anything else the Filipino can be known positively for? It’s always a boxer, singer, dancer, actor, sportsman or similar who becomes known. We have not heard of a Filipino biotechnologist, nuclear physicist, sci-fi writer, fantasy writer, manga artist or anything else. Of course, one can say that the Philippine science and technology field is so neglected. But who cares in this country? Most Filipinos want to be famous entertaining or punching somebody while raking in the money, instead of finding a cure for AIDS or submitting a program for solving poverty in his home country. And those Filipinos who are trying to find a cure for AIDS or solving poverty, seem to be pushed into the background or out of the country.

This seems like shameless plugging, but I’d like to use myself as an example. Back in 2002, I joined a sci-fi Yahoo group where I later found a publisher calling for submissions. I dropped in some of my short stores, and thus Gate Way Publishers came out with my short story collection, SFRP2003. I’m not really earning much from this. But it is one achievement I feel proud of. And it’s something different from being a singer or boxer. But it hasn’t created waves in the world. 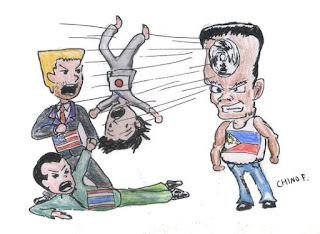 Thus, from my case, I wonder if there are any Filipinos who have tried sci-fi writing like mine. So far, a Filipino sci-fi writer is unheard of. Can someone else worth mentioning step up to the challenge and be famous for something else than being a singer, boxer or kariton book-pusher (or anything as common as those)? But then again, I mean that this person should only be doing their job right, and not just trying to draw attention to themselves. It’s most likely the fellow Filipino’s fault for lauding someone else. They will go for the pretty-faced entertainer or sportsman who's always the object of bets.

Finding other renowned Filipinos around is sadly marred by some hoaxes. That Flores invented the fluorescent lamp is a hoax. I searched and found Irene Mora, supposedly the first Filipino astronaut, but even this was declared a hoax. Tsk. Even in such a thing, deceit is used to try and make Pinoys famous. Nothing surprising, but still sad.

I would like to draw attention to Pinoy artists Fred Carillos and Whilce Portacio, who excelled in comic book drawing, drawing He-Man and X-Men. Even Rex Navarette (maker of “Maritess and the Superfiends”) became a stand-up comedian and seems pretty laudable. There’s a Filipina F-16 fighter pilot in the U.S. named Monessa Catuncan, and there’s General Edward Soriano in the U.S. Army. But I wonder if these guys are well known compared to Efren, Lea or Pacquiao.

Thus, I believe the void is big for Pinoys to be known for something else than the usual. But it’s an even bigger void for the people who believe that Filipinos should excel more in singing, dancing and boxing, and less in manga art, science or being a fighter pilot, or anything else.
Posted by Unknown at 11:16 PM