I have always wondered whether the Philippines has a lot in common with South American countries because of the obvious facts: having been colonies of Spain, and ending up in poverty after the colonial era. Later on, I found a study by a visiting professor that stated that the Philippines is only Asian in location; in everything else, it is a Latin American country.

Link to a pdf paper by Robert Nelson 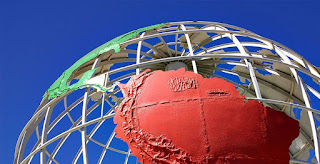 I have to very much agree with this assertion. Nelson's points are logical. Argentina's Juan and Evita Peron mirror Ferdinand and Imelda Marcos, who became dictators and bullcrapped their countries to shreds. South America is mostly Catholic with some weird devotions, like us. Many tried democracy though fumbling in the end, like us. In the end, the problem is in culture.

There certainly is a lot in common between the Philippines and Latin America. It makes we wonder whether Filipinos should look to Latin American history and recent developments to see whether they can learn something. Some people point that we are very different and such a comparison should not be made, and we're Asian and should follow Asian culture, but but hey, that just doesn't apply easily. The only thing different is that we are in a different continent, and that we were under the direct control of the United States after Spain.

Nelson even points to many cultural factors that include the cultural items planted by Spain. I agree. We have Spanish Pride, Amor Propio, and all that other baloney Spain gave us. We have false values given us by Spanish culture of the 19th century, when it was a bullcrap imperialist power. Many today would blame America for the Philippines' problems, but I don't see it compute. Old Spain is to blame. Of course, Spain can't be held accountable today because they've changed since then; but still, many items of Spanish 19th century culture carry on to today. Those should be weeded out so that we can see better, more responsible people and better cultural behavior. Of course, there are native aspects we may have to fix too. Just refer to my earlier posts about colonial mentality and the prehispanic Filipino for more information.

Yes, Philippines culture is to blame for most of our country's failures, including the economic side. I suggested studying Latin America to see how they did, because it seems that the countries there are doing better than us! But conservatives will find that a problem since most of Latin America is mostly leftist! But the answer to that is see just how their problems were addressed - solved or not - and see how we can solve ours, not to take everything that Latin America did. But obviously, the current government's solutions are not working.

One obvious difference is that most business in our country is run by Chinese (typical Filipino businessmen can't run a business properly, my observation). So that's one of our links to Asia. But also, these Chinese hate mainland China - that's why they're here. Why? They hate the bullcrap Chinese dictatorial government - look at what it's doing in Tibet. And yet many Pinoys hate them because they're "kuripot" (i.e. They know how to handle their money)? It's time to shape up.

But still, Spanish tradition holds us captive. Let's shake off these shackles and forward culturally. That Spanish may have been responsible for the creation of the Philippines, but we are responsible for today and the future. Time to let go of the past.
Posted by Unknown at 11:28 PM