It all started with Kuma/War, a free first-person shooter game which allowed me to play the role of an American infantryman. Then I heard of an official game sponsored by the U.S. Army, America's Army. I decided to download and try out this game now that I have a spanking brand new system, and now I feel I have the ultimate military first-person shooter since Counterstrike. 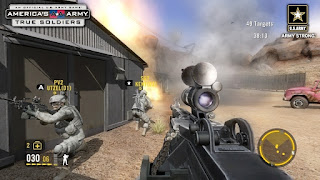 It's not that easy though. Since it's been around since 2003, there are a lot of veterans now, and I easily get chopped to pieces by them in most of the rounds I've played. I though able to reach an honor level of 20 (Honor is the level of experience you've gained through many games played), I have a few kills, but that's nowhere near those of the players who often chop me up (LOL).

Nevertheless, this certainly is a nice experience for those war freaks and military enthusiasts out there. Gives a good glimpse of the experience of the American soldier, and what they're going through just to do their job.

It's free for download at the site above, but check the system requirements, as I had to wait 4 years before I could afford a system that could run it.
Posted by Unknown at 2:15 PM