The Myth of Colonial Mentality

I'm sure most of my generation in the Philippines is familiar with the concept of "Colonial Mentality" - also known as Mental Colony to us Engrish experts. And here in the Philippines, colonial mentality has a bloody reputation as one of the alleged causes of our country's sorry state. 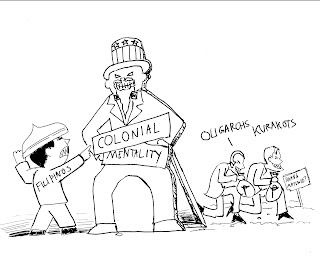 But if you ask me, it's much more complicated than that.

An idea I don't believe anybody should be "guilty" of, because to start with, it isn't even a crime.

Colonial mentality by itself isn't that bad, because if there's something out-of-country that's really better than what we have, then should we appreciate it? Just because something isn't Filipino doesn't mean it's worse. In fact, you will very much notice that other countries are doing better than the Philippines. Anybody who thinks otherwise needs a reality check. People are giving anecdotal evidence that despite higher taxes and harder work in the UK, US, Japan, and other such countries, they get benefits and a much more trouble-free life than if they were living here.

You can't blame people for admiring other countries' progress. You really can't - real progress is present in those countries. After the idea that the industrial age spawned a twisted idea of what 'progress' is, many people in those countries are at least aware of it and are redefining progress into a concept that is better for all. But in the Philippines, some people still accept progress as the

Look at it: we see people like John Maxwell, Stephen Covey, writing books about these "seven habits", "21 rules" and so on, on handling life, balancing work, and just plain fixing up your life. And these writers have moral bases for their works. Has any Filipino thought of a certain "10 rules to improve life" or something like that? Sorry, but I haven't heard of any such thing, and that's a sign that the Philippines is lagging behind, not just scientifically and industrially, but morally and in ideas as well.

Of course, all these moral resurgences, all these new revivals of morality and religion are not the only things coming from out-of-country. Of course, we have culture. Out-of-country TV, music, food, books and other stuff. If you like anything of these that are local-made, you're considered patriotic, and when you like the foreign stuff, you've got the supposedly "bad" colonial mentality. You're supposed to be bad because you like all the foreign stuff, and are thus a traitor to the country because you like less of your own country's stuff.

No, I dogmatically say it's not bad! A lot of the things coming from abroad are ideas like quality control, striving to do better, self-improvement and thinking out-of-the-box. Correct me if I'm wrong, but these are dominantly foreign influences and ideas. Imagine if these never reached the Philippines. We'd be in the muck of antiquated thinking by now.

And most of all our "state religion", Christianity! It never came from our own shores. It came from the Middle East to us via Spain and America. It's a foreign thing. Certainly Christians in the Philippines are guilty of "colonial mentality" by embracing a foreign religion. The morality of doing good to others, turning the other cheek and the golden rule (do to others what you want them to do to you) aren't likely to be thought of by our own philosophers and thinkers (if there are any).

Imagine a Philippines closed from the world, refusing all outside influences, accepting no other cultures but its own, consuming only its own products and sticking to its own moral principles. What would happen? It would still be in the stone age by now. And probably we'd have a much smaller population than we have now. With the kind of morals Filipinos have, they'd would be killing each other over a mere joke or a spoon of rice - even when there's no famine. I don't know, do I make Filipinos look greedy? Maybe it's true anyway.

But I do acknowledge some side effects of colonial mentality. If there's something good in the Philippines found, people tend to overlook it. If there's talent or effort, or achievement somewhere in the Philippines, and someone out-of-country is better, the Philippine achievement gets under-attention. When there's an inventor here who makes something great, it goes unnoticed. The government doesn't even acknowledge the feat of an inventor. Rarely do people give proper credit to the creator of an idea or something in the Philippines. Filipinos have a bad idea about intellectual property rights. Like who created a story, a logo, etc. Plagiarism is thought of as OK in this country, and all that. Heck, to think about it, intellectual property is a foreign idea. In the Philippines, just crank out the work, who cares about who you are. Sucks doesn't it?

Now if I say it's OK to like foreign things, does that mean that we lack pride in our own country's stuff? Not at all! I believe we have good stuff in the Philippines. We have nice cultural festivities, and our famed hospitality - which I don't see anywhere these days. Frankly speaking, the Filipino doesn't lack pride - he has too much of it. What kind of pride? I'll mention it later.

Well, on another thing, Some people may blame only the most powerful country in the world today, the United States, for the problems of the Philippines. That's only the surface of the problem. Before that, we had the Spanish over us, and yes, they left a more indelible mark of culture on us than the US. That's yet another myth - the US is so powerful, it's most likely that you could put the blame on them. That would be a sign of lack of concern for facts. Damn. But going on, I believe that the Spanish culture of the 1800s and not today is still prevalent in Philippines society. That left us with "Spanish pride", a very bad selfish attitude that makes Filipinos very mayabang (arrogant). This is the pride I believe Filipinos have too much of.

Filipino pride is much misplaced these days. Filipinos tend to be proud of the wrong things. Pride in one's own self and mediocrity. Pride in having many wives or women and too many children to feed on one job. Pride in being a cheat against the rules rather than being good in one's job. That's the stupid kind of pride Filipinos have.

Goodness, didn't you notice another thing - that the name of the Philippines itself is foreign? Yes, our country is named after King Philip of Spain! Proud to be Filipino can mean being proud to be of King Philip! Don't you get it?!

This is one lesson from it all: we cannot stay - and we never were - "only Filipino". Influences from around the world have made up the culture that we are in. We can't exclude anything that has been received from other countries. Think of it this way - we have contributed to other countries' cultures as well. Ask yourself where the world "Imeldific" came from.

What's my point here? It's not that colonial mentality is a myth. No, I acknowledge that it's very real. What's the myth then? The real myth is to single out colonial mentality as one of the major causes of our country's deterioration. I say we cannot blame colonial mentality as a major source of our problems in the Philippines. As I said in my previous blog postings, the heart of the Filipino is to blame. It's too set on the physical things of this world, on experiencing temporal sensations and chasing after mundane things of the world. There's no more drive for self-improvement and searching for higher powers. It's been said that a nation's condition is a result of its moral condition. That very much applied to the Philippines, didn't it?

When it comes to values, liking foreign values better than our own local values isn't bad - especially when you realize that the foreign countries are doing better then us. Remember, Christianity came from abroad too! We wouldn't have a sample of this religion we consider truth if foreign people didn't come in. Even some values we realize today as right came from abroad. One example of that value is independence. We've always clamored for national independence, but what about our own personal, individual independence? Yes, I consider this a value. It's the value of getting your glass of water instead of sitting on your lazy butt and asking someone who's tired to get it for you. It's the value of acting responsibly, by yourself, on your own two feet, without depending on others or making them do your responsibility. That's why the US is s strong country - it has strong people who do their own work without unnecessarily bothering others or needing to be reminded. Filipinos on the other hand, will pass work or pass it to others any chance they get. Thus, our country is in the pits.

If you assume I believe in the colonial mentality that means, returning under the yoke of foreign powers, like the US, I would say, why not? Manuel Quezon said, "I'd rather see the Philippines run like hell by Filipinos than like heaven by Americans..." and that came true. It doesn't depend on the point of view you look from -- the Philippines is in a sorry state. Wait... it's the Filipinos themselves who are in a sorry state!

OK, thanks for letting me post this long rant...
Posted by Unknown at 11:14 PM