About Throwing Pearls to Swine

My pastor and I had a discussion some time ago about this verse in Matt. 7:6 -

“Do not give dogs what is sacred; do not throw your pearls to pigs. If you do, they may trample them under their feet, and turn and tear you to pieces.”

He expressed disagreement with the common interpretation that the verse means you should not waste time with people who are rejecting your Gospel of the kingdom. He says, no, you don't leave them alone, because they are the ones you exactly are reaching out to.  Thus, if you believe this commonly believed meaning, you may actually be doing it wrong. 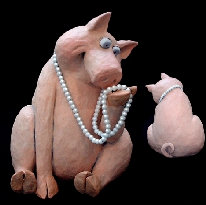 One of the things my pastor said was that you should look at the verse's context. For example, you can't just take one verse and give it a meaning, or that may become proof-texting. Its meaning is actually based on the surrounding verses. In the case of this “pearls to pigs” thing, the surrounding verses are about hypocrisy.

“Do not judge, or you too will be judged. For in the same way you judge others, you will be judged, and with the measure you use, it will be measured to you.
Why do you look at the speck of sawdust in your brothers eye and pay no attention to the plank in your own eye? How can you say to your brother, Let me take the speck out of your eye, when all the time there is a plank in your own eye? You hypocrite, first take the plank out of your own eye, and then you will see clearly to remove the speck from your brothers eye.”
(Verse 6 is in here)
“Ask and it will be given to you; seek and you will find; knock and the door will be opened to you. For everyone who asks receives; the one who seeks finds; and to the one who knocks, the door will be opened.
“Which of you, if your son asks for bread, will give him a stone? Or if he asks for a fish, will give him a snake? If you, then, though you are evil, know how to give good gifts to your children, how much more will your Father in heaven give good gifts to those who ask him!
“So in everything, do to others what you would have them do to you, for this sums up the Law and the Prophets.”
(Matt. 7:1-5. 9-11)

So, based on this sandwich principle, the verse is about hypocrisy. In the NIV, the verse is part of the “Judging Others” section heading. Thus, what the “pearls before pigs” verse (which is also throwing something sacred to the dogs) is likely based on this theme.

Admittedly, it is difficult because it seems the cultural context of this verse could not be researched that well. For example, “throwing something sacred to the dogs” and “throwing pearls to pigs” are figures of speech that belong to a certain culture or time. In Jesus' day, they meant something, and today we seem unable to find out what these figures of speech really meant. We have more of the textual context to help us.

So what could it really mean? Perhaps one is, if we use part of the older interpretation, do not waste your time with hypocrites. If the Kingdom of God is given to hypocrites, then they end up not just rejecting it, but ruining it as well (hence the trampling over analogy).

Or another interpretation is that hypocrisy ruins your preaching of the Kingdom of God. It will be like throwing pearls to pigs – you waste it. That is what Jesus condemned in other parts of the Gospel: “having the form but denying the power.” Thus, people will treat you and your message like dirt. And as a result, people are less likely to accept God’s word. I find this one to be the more likely explanation.

The above are must my own interpretations. The question will be difficult to settle for sure because we don't know the exact meaning of the language used in those times. But certainly, leaving people alone and not persisting in sharing the Word of God because of non-acceptance at first should avoided. We should certainly strive to keep at preaching the Gospel with the goal of making an initial refuser accept, though without need for force. Do it by example. “Sometimes, you are the only Bible others see.”

(image courtesy of the Pearls Before Swine Blog)
Posted by Unknown at 1:52 AM