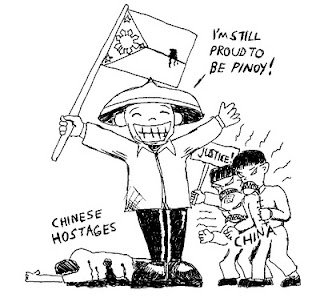 The Manila Bus Hostage Crisis revealed everything that was wrong in Filipino culture, from the policeman with misplaced pride and who through corrupted logic thinks he can gain "justice" by holding people hostage, to the Filipino reaction of defensiveness against international criticism.

The Australian's Emma-Kate Symons came out with an article condemning the moronic defensiveness of Filipinos to international opinion. She mentioned many underlying aspects of Filipino culture in her article, the very same things that I and my colleagues have observed long before in Antipinoy.com.

As mentioned in Symon's article, people like Aurora Pijuan and Billy Esposo retorted that Filipino tourists were murdered in Tiananmen in 2005. If China has the gall to demand justice from Filipinos on the Hostage-taking, then the Chinese should give justice as well for the 2005 incident, they say.

Very wrong. China already gave justice for this. And the Madrigals reportedly even released a statement that they were unfairly being brought up in Pijuan's article. Pijuan, Esposo and company were creating a red herring issue to help the parties involved in the Manila bus incident escape accountability.

Very wrong indeed. The work of morons. They are proving that the Chinese are not the ones who are OA (overreacting)... the Filipinos are (well, Filipinos have naturally been OA).

Lately, a letter by Liberal Party senatorial candidate Alex Lacson circulated around the Internet. It mentioned that we should be proud of the few Filipinos who have great achievements around the world and avoid depression by defending what's good about them. They believe that actively defending Filipino “pride,” along with being noisy about it, is the way to uplift our nation.

Sorry, guys, Lacson's got it wrong; it draws more attention to your faults. It’s like an erring employee who was punished, and instead of humbly going back to work to rectify the faults, he instead mouths out all his “achievements” and “good points,” blah blah, until the boss cuts him off with, “prove that you’re really good.” Again, It’s like the village idiot walking around town shouting "I'm cool, I'm great," when it only confirms that he’s the village idiot.

It also confirms that the goal of Filipinos is just to feel good, and not necessarily be good. Alex Lacson may be well-meaning, but he also subscribes to Filipino emotionalistic and escapist culture. It shows that Filipinos have truly lost sight of what is the right thing to do.

Defending the Philippines' pride and promoting our "positive" side is the wrong way to clean up after the hostage fiasco. Because it is nothing but escaping into "feel-good" distractions that take us away from focusing on the problems of Filipino society and culture and directly addressing them. We should not be afraid of facing the ugly truth: problems exist in our core culture and society and we should fix them even if the solutions seem to go against the popular notions of Filipinism.

And another idea about our people's moronic reactions is that we have to be defensive because we are being put down by the world. No, my friends, that is a myth. Who said that the world is putting down the Philippines? Is that the imagination of leftists? Likely. Also, China's demanding justice from our government is not putting us down. It is asking for what is right.

By the way, if you believe that Chinese are lashing back by oppressing Filipino OFWs in Hong Kong, think again.

Probably Esposo was right when he said that "we are the ones to put ourselves down first." By voting the wrong people in office, by practicing the wrong cultural traditions and having the wrong beliefs, we put ourselves down. We also tend to refuse all the solutions that could fix our problems (charter change, economic liberalization, voting Gordon for president instead of an incompetent).

"I am not ashamed of being Filipino, as being Filipino for me is just a technical accident of birth. I care about my country, this is a given, but I will never buy the ideology... that I should be proud of this race just because of the accomplishments of a handful of individuals."

Another observation of the Filipino's double standard in fandom is mentioned by commenter Mel:

The Filipinos can’t have it both ways. They rejoice and identify over the ineternational triumphs of one person: Manny Pacquaio, Charice etc but they don’t want to be identified with the international sins of one person (Mendoza).

Another thing to think about... so some Filipinos say that Hong Kong was overreacting. What if Filipinos were the ones killed in HK in the same manner? Wouldn't we act the same way?

"Filipino pride" is a "head-in-the-sand" escape in order to feel good. But the problem with this approach, as mentioned by Get Real Philippines colleague Benign0, is:

The more we bury our heads in the sand like the proverbial ostrich, the more our asses stick out high in the air.

What is it with "Pride?" Why is the Filipino always trying to find something to be publicly proud of? Is it because there really is something wrong with us, but we don't want to change it, and so instead we resort to empty saving face in order to still look good?

I will quote my friend who said it very nicely:

It's always easy to say you are proud about something without ever really caring about it. The majority who says that they are proud to be pinoys are mostly the ones contributing to the current deterioration of the Philippines. ...For me, pride... in being a Filipino is best shown in action, not in words. If you're doing that, you don't need to say it 'cause it shows.

Filipino pride is always misplaced. Let's put in in the right place... in our actions. Not words.

Instead of boldly shouting to the world, "I'm proud to be Filipino," just do what is right, quietly, and thus be known for your actions, and not your words.
Posted by Unknown at 4:43 PM