Sodom and Gomorrah - Another View

Some people today are probably shocked when they see homosexuals cavorting in the open, or famous people they admire suddenly getting married to a same sex partner. In today's Christian-dominated world, it becomes an object of intense debate and scorn, with the Christians thinking that the world is coming to an end, or society is breaking down with the coming out of homosexuals. 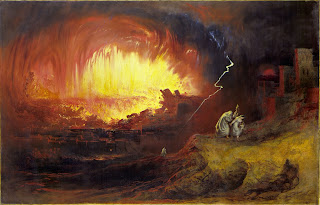 What they don't realize is that it has happened before.

Homosexuals have been around since humans have been around on earth. Famous Greeks like Socrates and Alexander the Great are thought to have been homosexual. One should also recall the story of Horus and Set, where Set was to sodomize Horus in order to discredit him, but Horus and Isis had a plan against that. Likely, in every continent, one could find an example of homosexuality, such as in tribal Africa, tribal America, ancient China, Micronesia, and anywhere. Homosexuality was very often reported to be an integral part of ancient cultures, such as the African Azande Etoro and Marind-anim of Micronesia (who even considered heterosexuality as bad!), and need I remind fellow Filipinos of our own Babaylans! In fact, if you would go back in time to very ancient days, you might find even half of the population engaging in homosexual activity (well, might)! Homosexuality was probably considered normal in those days. Be glad you heteros who live in today's era!

Perhaps the most famous example of ancient homosexuality in the Christian perspective is the Biblical example of Sodom and Gomorrah. Of course, homosexuals themselves hate this story, as it condemns their sexual orientation as evil. But I will not disagree with the Bible; homosexuality is certainly condemned by God. It is not a practice that he meant his creation to do. It is a violation of nature.

But aside from homosexuality, there was another thing that condemned Sodom and Gomorrah, probably even more than homosexuality itself.

Recalling the Biblical example, God sent two angels to warn Lot about his intention to blow the two cities to smithereens. The two angels were also to scout on whether the city had become a bit better so that such destruction was needed. As visitors to Lot's city, they were his guests. But what happened? A crowd of men went upon Lot's house and tried to break the door down. They wanted to have sex with the guests. Well, if you know the story, it failed.

The homosexuals of Sodom and Gomorrah wanted to lay on their visitors even if the visitors did not want it. They thus forced their sexual orientation onto other people who were not of the same orientation. And of course, sexual orientation is not forcible on other people because the person's own body is at stake. It is their property.In other words, the Sodomites and Gomorrahites were raping their guests! And thus forced sex, whether homosexual or heterosexual, is wrong.

My other view of Sodom and Gomorrah, is that they were forcing on other people their own will, without respect for the other people's wills. Let's look again at the example of Horus and Set. Set's orientation was likely not homosexual, as he had a wife. But sodomizing Horus in order to discredit him gives support for one of my views about sexual activity: it can be done for dominance. If Set had succeeded in his sodomy, he would have had dominance over Horus.

It is possible that the men in Sodom and Gomorrah were like that. They used sex, probably on both men and women, as a form of domimance. They wanted to lord themselves over other men with their dicks. Fast forward to today, take note of prisons. Sodomy happens among prison inmates even if their orientation is normal heterosexual. But when in prison, they become "prison-gay." It is likely that in the prison society, sodomy is used as a form of dominance. This means disrespect for someone else's rights.

Doing something to a person against their will is the sin of the Sodomites and Gomorrans, aside from homosexuality. Even if homosexuality was widespread in ancient times, not everyone was doing it. So why force others to do it? It is a violation of nature and of the rights of others!

To me, it would have been fine if they did not force sex on visitors and just do it on their own. And that's my stand on homosexuals today. Leave them alone. They can do their stuff all they want. They just don't have to force it on people who don't want it. Neither should we "normal" people force them to give up their homosexual ways. But once they do go out of their bounds, that's when you sanction them. Let them be. But when they touch others unnecessarily, that's when you call up a fight.
Posted by Unknown at 4:10 PM