I had once been accused of being an anti-patriotic person in a comment on my Sabah post. Some may say that nationalism means that you should support a fellow countryman, no matter what he is doing. Support your country, even if it is corrupt and doing wrong. I disagree with all this. 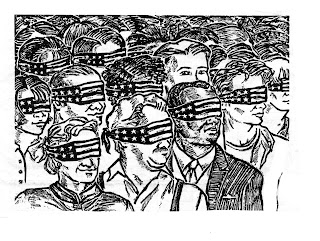 Just think of it from the point of view of Germans in World War II. We all know today about the Holocaust against the Jews. It was an evil and condemnable thing. But the German civilians mostly did not know about it. So what if the German civilians who have a sense of decency learned about what their Nazi leaders were doing? What if they realized that Hitler ordered a genocide and said that this was a national imperative?

Some would believe that being Germans, they should obey their national imperative. This is nationalism for them.

But I beg to differ.

If I were a German in those days and I would discover the Holocaust, I would immediately be against it.

What the Nazis did was evil and immoral. Thus, if I were a moral German, I would go against their initiative. I could be called anti-patriotic here because I don't support my nation's initiative... but at least my conscience is clear because I am a moral person. Morality is above patriotism and nationality. It is above any nation.

Another example: if I were a Christian in Arabia, and a fellow Christian asks that we hide our Bible study activities, I will hide it. That's the practical thing to do in Saudi anyway. And what we're doing is morally good.

But let's say a fellow Filipino who has really murdered someone takes refuge in my place, asking me to shelter him. Superpatriots would say, shelter the Filipino, he is your countryman. But I would not. I would turn him over to the police. He murdered someone, for crying out loud! He is morally responsible for his act. Even Filipinos with prostitute trafficking businesses will not be supported by me. I'd rather report them.

I believe this is true nationalism; having concern for the nation on a truly moral perspective. If my country's government is doing good, I am for that; if they chase prostitute traffickers, serial killers and jueteng lords and put them behind bars, I am for that. Supporting the Filipino athletes in the Olympics, SEA Games and more, I am for that. But the corruption and dereliction of duty of any government deserves scorn.

Thus I conclude that anti-patriotism is not necessarily wrong. It depends on the reason or issue of concern.
Posted by Unknown at 6:15 PM