As I write this, the Third IPMS-Philippines Bert Anido Chapter National Contest is happening. For those who don't know about this hobby of mine, I build plastic tanks, planes, ships, and other such model kits, and I joined a group of people who do the same thing. Now we have a third Nationals Contest in the group's history and it's another major milestone written down. I didn't go to the event at SM Megamall this Dec. 9 since I felt a bit exhausted and looked for more work at home job postings. I have two ships and three planes on position in that exhibit anyway until Sunday, Dec. 11, so I guess I can leave them there for the while. If you wanna get there, get there then. It's once in a lifetime chance. 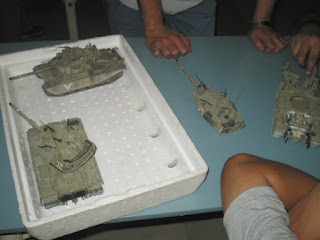 A little history. Since I am a military enthusiast (fond of guns, tanks, jet fighters, battleships, and reading about World War two, Vietnam war and all that), and an artist as well (fond of drawing and sketching), it soon came to me that I should get into this hobby of building facsimiles of military equipment. I get the same fix (satisfaction) that basketball enthusiasts would get from watching basketball, and cross-stitchers get from doing their hobby. It's a hobby, for crying out loud. A hobby I like, and I don't want anybody messin' it. At least my mom agreed, it's better than buying cigarettes or drugs, and going into vices like drinking and girls.

But I'm not just harping on the scale modeling hobby. Having a hobby is important. Most squatters, people you see on the street doing nothing, people who get into crime, you would often remark that they have "nothing to do." How true. So for something to do, get into a hobby. Whatever you are, whereever you work, whatever salary class you're in, get a hobby. It helps a lot.
Posted by Unknown at 10:24 PM